Welcome to FCCI Insurance News where we show you how FCCI makes an impact on our customers, community and teammates.

The FCCI Charitable Foundation, the charitable arm of FCCI Insurance Group, distributed its first local donation on December 20, 2019. FCCI representatives delivered an $80,000 check to All Faiths Food Bank. The funds for this contribution were raised through a month of fundraising events in October. The FCCI Charitable Foundation Committee selected food banks from each regional location—covering 19 states—to receive the money raised from its fall 2019 fundraising campaigns; All Faiths Food Bank was selected as this region’s beneficiary.

FCCI Named a Best Company to Work For by Florida Trend

This year marks FCCI's 11th year on the list. Ranked #14 in the Large Companies category, FCCI is one of only three companies in the Top 15 that is headquartered in Florida. Companies that participate are ranked on workplace policies, practices, philosophy, systems, and demographics, as well as employee satisfaction as measured in an anonymous employee survey. 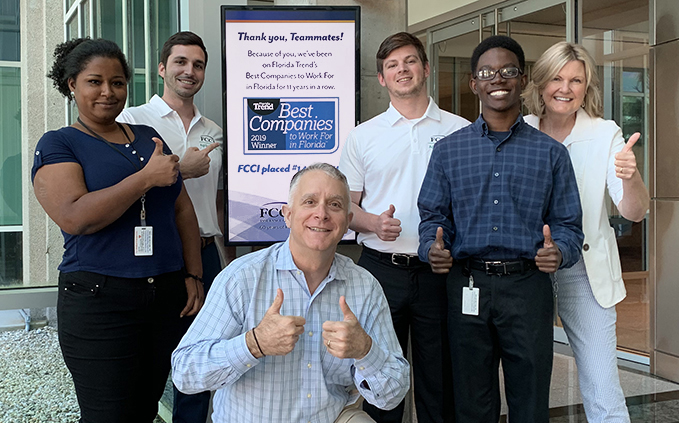 FCCI Builds its 6th and 7th Habitat for Humanity Home

FCCI teammates contributed 379 hours to build two homes for two deserving homeowners. We are proud to be able to give our time and energy to provide hope, shelter, and a sense of community to these families.

May 6, 2020 –The FCCI Charitable Foundation has distributed $100,000 for COVID-19 relief in recognition of and on behalf of FCCI’s valued agency partners.

March 20, 2020 – Many companies give back. But not all of them have a specific, organized way to do so. Sarasota-based commercial property and casualty insurance company FCCI Insurance Group has taken a leadership role in corporate giving in the region by doing just that.

Mississippi Profiles — FCCI: A Commitment to Communities and People

August 2, 2019 — On July 12, FCCI hosted an inaugural event dubbed "Career with a Purpose: A Day at FCCI Insurance" to give interns at FCCI and affiliated insurance agencies a chance to learn about career opportunities in the insurance industry.

FCCI Named a Best Company to Work for in Florida

July 26, 2019 — For the 11th consecutive year, Florida Trend magazine has named FCCI one of the best large companies to work for in the state. At #14 on the list, FCCI is one of only three in the Top 15 that are headquartered in Florida.

FCCI Named One of the 350 Biggest Companies in Florida

June 24, 2019 — Florida Trend has again named FCCI as one of the biggest private companies in the state.

April 30, 2019 — IMA announced it is partnering with FCCI’s Midwest regional office in Indianapolis as their preferred insurance carrier. FCCI’s coverage, available to eligible IMA Members, will include General Liability, Workers’ Compensation, Property, Commercial Auto, Equipment and Umbrella. The partnership will be effective July 1, 2019.

April 19, 2019 — The Central West Coast Chapter of the Florida Public Relations Association (CWC-FPRA) recognized the area’s best work in public relations, marketing and communications during its “2019 Image Awards: All that Glitters is Gold" event this week. Among the award winners was FCCI Insurance Group, receiving an award of distinction for the FCCI website.